Welcome back!
Yes, we've been freezing our bottoms off here, with temperatures dropping as low as -34 C and I tell you, Florida is looking mighty fine! I just saw a pic posted by one of the guys I work with, they were out on a weekend expedition...at -40C (shiver).
Having to work outside in this weather, especially at night...there are no words...
BUT! Fortunately, we have Brian Wilkerson with us today, and HE is not short on words.
Please welcome Brian Wilkerson (crowd stands to applaud) 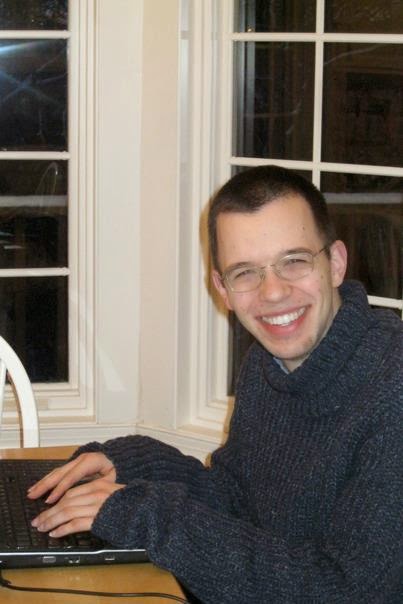 
Brian Wilkerson was born in Lawrence, Kansas and later moved to Twin Cities, Minnesota. While in high school, he wrote fanfiction about his favorite anime and while attending college, he switched to original fiction. He majored in English Literature and History, but ended up working for a bank. After hours, he continues watching anime and writing original fiction.

Let's jump right into the interview and we will share his work right after.

Do you write full time? How much of your life is set aside for writing?
I’m not a full time writer but I’m still writing all the time. Even when I’m waiting at a traffic light I’ll be turning something over in my head (I shelf it when the light turns green). As for the genuine act of writing, that’s ideally two hours a day. I have to say that I envy you if you really do get in two hours a day...lately I have to literally trade off my precious 3 hours sleep/24 if I want to write.

Could you tell us a little about your novel?
Looming Shadow is the sequel to A Mage’s Power and the second book in the Journey to Chaos series. It follows the aftermath and fallout of the climax of its predecessor while also advancing the chess game of Tasio the Trickster and his cosmic opponent.

Would you take us on a brief tour of your novel and the world you’ve created?
We can start in the home of my protagonist. Eric Watley lives in a one-room apartment that was built into the underside of a bridge. He almost had a troll for a roommate. The bridge is in the Warrior District of Roalt, the capital city of Ataidar. It is a theocratic constitutional monarchy and ruled by Queen Kasile Landros Ataidar VII. She is descendent of the founder of the country and its patron deity, Fiol the Avatar of Fire. Sharing the Isaryu continent with Ataidar are countries with differing political systems and patron gods. It also shares the continent with countless monsters. As a mercenary, part of Eric’s livelihood is taking care of them. I have to say I feel as though I fell into an interworld abyss, lol. I like that I can feel your passion for what you write, and that makes me want to know more. Oh, and I now know what fanfiction is :o)

Do you work from an outline or just go with the flow? If you use an outline, how detailed is it?
I am, for the most part, a “panster”; I write by the seat of my pants. A basic outline is useful to guide major events but the nuts and bolts are loose. It’s important to have a narrative backbone and be flexible at the same time.

What is the time span in your novel, weeks, months, years? How much research went into it?
Fantasy worlds require a great deal of construction to make them internally consistent. It can take months. Then there’s the writing and the rewriting and then the brainstorming to get past a rough spot etc. That takes longer.

Could you tell us how you go about your research, how you ‘catalogue’ information to make it all work?
It is necessary to, as you say, “catalogue” how the world functions. There are many aspects that fit into the whole. “Magic” by itself is a large folder that has many properties, rules, guidelines, sub-divisions, rules that break the other rules, and mechanics. The important thing is to keep everything internally consistent. Even if “X” wouldn’t make sense in real life, if there is an explanation that works in-universe then it’s ok.

How does this book differ from what you have written in the past?
“A Mage’s Power” was basically a collection of writing challenges: A protagonist with nothing (I didn’t know this was a popular one at the time), a reconstruction of the Just Like Robin trope, a deconstruction of a world infested with monsters, and a modern society that openly had magic available to it.  “Looming Shadow” is more for its own sake.

How have the changes in present day publishing impacted your schedule as a writer?
Amazon’s KDP program is the reason I have two books published today. It is instantaneous publishing; no agent, no publisher, no deadline. I had to overhaul Looming Shadow years after finishing what I thought was the final draft. This caused a two-year gap between the “A Mage’s Power” and “Looming Shadow” release dates. By then my readers were getting impatient so I can only imagine what a publisher would be saying.

How do you handle marketing? Do you have a plan, a publicist or just take one day at a time?
I do a lot of stuff on Twitter and Facebook. The Independent Author Network is helpful in the former and Clean Indies Reads is the group I visit the most frequently. Also, Tvtropes; it’s a more passive advertisement where I list my work on trope pages. The closest thing I have to a publicist is BZHercules, who is more my editor/formatter/proof reader but who also provides tweets and a book trailer.

Do you have any advice for aspiring authors?
1.) Write every day; even a sentence is worth it because even a sentence is progress.
2.) Visit Tvtropes regularly because all writers stand on the shoulders of those that come before them, even if they don’t know it, and that’s okay.
3.) Stock up on something with caffeine in it, whether coffee, energy drinks, or something else. Unless writing is your day job, you will need it.
4.) Hire an editor (and while you’re at it, a formatter) because you can’t do it yourself; seriously you can’t. Just bite the bullet and pay for it.


Currently in the works is Journey to Chaos book 3: Mana Mutation Menace.

I must say that this has been a fascinating interview. Thank you for stopping by, Brian. Now, let's look at the novel, Looming Shadow: 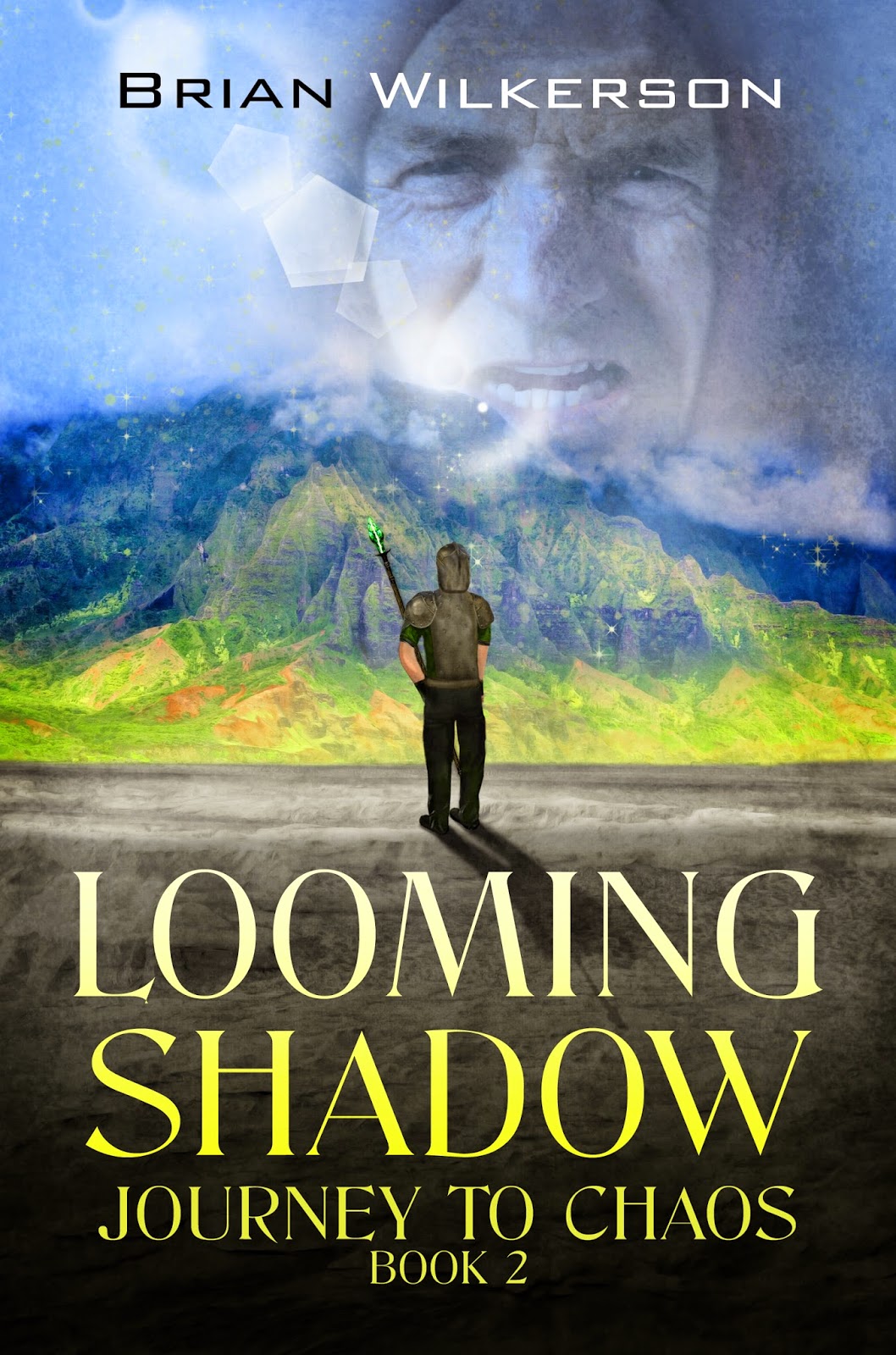 Eric returns to Tariatla but his reputation precedes him. In his new home he is hailed as Dengel's Vessel and The Trickster's Choice. Neither of these titles will allow him to live as a humble mercenary. They attract dangerous attention. A shadow looms over Eric and will stop at nothing to snuff him out.

Eric was bound to a chair. His wrists and ankles were shackled to the chair legs as well as his arms and legs. A magic canceling collar was locked on his neck and a thick gag tied between his teeth. Four floodlights shined on him from four directions. There was not a single shadow in the room.
“Wake up, my little shadow. I wish to speak with you.”
The first thing Eric noticed was a groggy feeling preventing him from truly waking up. The second thing he noticed was that his neck was cold and his mouth was stuffed and dry. His wrists and ankles were stiff and immobile. So this is what Kasile felt like...
He breathed through his nose and high concentrations of mana flowed into him. It revived him. He hadn't tasted mana like this since he was in Roalt and it made him more alert than he'd felt in two weeks. Then he opened his eyes and saw Mr.15. At once, he tried to disappear, but the floodlights shredded his Dark Veil immediately.
“I see you appreciate the lights I've provided you,” Mr.15 said affably. “These are not mere mana-powered lamps but genuine light-elemental energy. Your pesky darkness will not work in here.”
Eric tried, but the darkness was out of reach. Even if his mana wasn’t trapped by the collar, he wouldn’t be able to hide his pinkie, let alone his whole body.
“One for each crime against me.” Mr.15 stood at Eric's upper left corner. “The first is for capturing Dark Staff: the traitorous bitch sold me out to the Bloody Daggers.” He stepped to the upper right corner. “The second is for having the gall to invade my lair.” He stepped to the lower right. “The third is for learning under that despicable child, Basilard.” He stepped to the lower left. “The fourth is for attacking my precious children. A prison of light for a creature of shadow. What do you think?”
Eric couldn’t reply, but Mr.15 acted as though he had.
“Yes, it was difficult preparing this room, but given that you are a special guest, it was the least I could do. You will remain here until I finish discussing business with your superior, at which point, I will give you to Nulso. You may or may not be alive at that point.”

While most people will say that Eric is their favourite character he is not mine. My favorite is Tasio I like characters who are nothing short of the word CRAZY. I liked it when he showed Emily his copy of looming shadow (the script as he called it).

Brian Wilkerson's blog can be found at trickstereric.blogspot.com

Connect with the author:

Posted by Amethyst Eyes at 7:01 PM