You are just going to have to read through the interview, because today, we have an amazing person with us. I am very grateful to be able to share a little about Rasana Atreya and her writing.


Could you share a little about yourself and what led you to become a writer?
Back when we lived in the San Francisco Bay Area I worked in IT. Then, ten years ago, we decided to move back to India. I had two kids under the age of three so an IT job was out of the question. In my kind of work, if the network goes down at 3:00 in the morning, you had better be at work at 3:00 in the morning. With little kids that wasn’t something I could do so I was forced to rethink my options. I’d always loved writing so I figured it was as good a time as any to switch careers.

Do you write full time? How much of your life is set aside for writing?
Yes, I do write full-time but I’m terribly disorganised. I’m trying to force myself into a better schedule because if you let it, marketing and promotion of your books can take over your work-life. I think every author will agree with that comment!

Could you tell us a little about your novel?
I have written two novels and one novella. The manuscript of my first novel, Tell A Thousand Lies, was shortlisted for the 2012 Tibor Jones South Asia prize. UK’s Glam magazine calls it one of their five favourite tales from India. I had a traditional publication contract for this novel but I chose to decline it in order to self-publish. I have no regrets because it has been such an amazing experience. Because I was one of the first people to self-publish in India, I get a lot of media attention. And, when Amazon set up operations in India, they flew me to New Delhi to be part of that launch, which was pretty cool. Wow! That's so great. Good for you :o)

Back to Tell A Thousand Lies. This novel deals with superstition in rural India. Most of my writing deals with issues related to women so if I had to pick a genre, I’d say Women’s Fiction set in India, though I do have some elements of comedy in most of my writing. 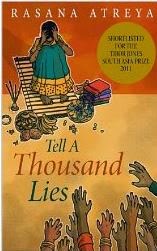 My novella, The Temple Is Not My Father, is about temple prostitution in India. Though the practice is officially banned, young girls are still dedicated to the Goddess, which often leads to sexual exploitation of these girls. This novella is also available is an audiobook now.

My novel, 28 Years A Bachelor, is also women’s fiction set in India (in that it deals with in-laws’ control over the lives of their daughters-in-law, arranged marriages etc.), but there is also lot of comedy in it. From what readers tell me, the comedy seems to work for them. Personally I am glad you added some humor, I can imagine the topic would be too heavy otherwise.
Where does the inspiration for you main character and story come from?
I happened to read two unrelated articles in the newspaper here in India – one relating to living Goddesses and the other to do with witches. The second article talked about a woman who was stoned to death for being a witch and I was like, oh my god! – in this day and age? Sadly the media is still guilty of fear-mongering today.

India is a land of crazy contrasts – extreme poverty and extreme wealth; female infanticide (babies killed at birth for being the wrong gender) and female engineers (I have a Master’s degree in Electrical Engineering); our ancient philosophy teaches us tolerance but we also have honour killings (women killed for marrying without the approval of their parents). I am one of the lucky ones in that I’ve had all the opportunities a women could ever want, so I choose to write about the less fortunate. That’s how Tell A Thousand Lies came about.

What is the message behind the story? Was it something you specifically wrote a story around or did it develop as your characters came to life?
My message is always empowerment of women but I don’t want to come across as preachy. I try to focus on the story and hope the message comes through.

Do you work from an outline or just go with the flow? If you use an outline, how detailed is it?
Like I said previously, I’m disorganized. Which also means I’m a pantster (one who writers by the

seat of her pants). I did try outlining, I really did. But it seems to suck the creativity out of me. When I start writing I have no idea where the story is going. I do meander in directions that don’t work, and often have to backtrack but, for me, that is part of the fun.

In Tell A Thousand Lies, the timespan is 16 years, less in the other two.

I had to do some research for The Temple Is Not My Father because I had no idea about temple prostitution. In all my other books I have a lot of cultural detail. My source is my mother-in-law who, happily enough, is an acknowledged expert in this area.

How have the changes in present day publishing impacted your schedule as a writer?
One oft-repeated advice to be successful writers is to have a large body of work. While I admire writers who can put out a book every three months, that isn’t me. It took me seven years to write and publish two novels and a novella. Still, I want to see if I can cut down on marketing and promotion and pick up pace, writing-wise. I’m also experimenting with audiobooks. I commissioned someone to make The Temple Is Not My Father into an audiobook but I might try my hand at doing one of the other novels myself.

How do you handle marketing? Do you have a plan, a publicist or just take one day at a time?
I’m the kind of person who likes to be in charge, so I do everything myself. I watch trends and try to make them work for me. Bookbub is this mega-marketing plan everyone swears by, but I wasn’t sure I could make it for me; after all how many people would be interested in reading about three sisters in rural India? Turns out, plenty were. Despite the hefty amount Bookbub charges for promoting your book, I was able to make my money back, and more. I have diversified, putting my book up on multiple platforms. I’m also a member of the Alliance of Independent Authors. I think of this as a wonderful professional investment because I have learned so much there. This is good information for our fellow authors, thank you!

I’m one of the most visible faces in self-publishing in India; as a result I get a lot of media attention. This has resulted in a lot of opportunities for me. Despite this 95% of my sales come from the US/UK markets. This is because ebooks still haven’t picked up in India. My next goal is to work on paperbacks for my novels. I’m in talks with a distributer regarding this. Couldn't you just go through Createspace? If Amazon is now in India, you must have access to it, providing you have an ITIN number.

Don’t rush to publish. Have beta-readers read your book to fix issues, then hire an editor. After the editor is done, also get people to proofread your book.

Could you tell us what you’re working on now?
I’m working on a story on ‘honour killing.’

Rasana is the author of Amazon bestseller Tell A Thousand Lies, which was also shortlisted for the 2012
Tibor Jones South Asia award. UK’s Glam magazine calls this novel one of their five favourite tales from India (June 2014).  Her other works are The Temple Is Not My Father and 28 Years A Bachelor.

Now on to more personal stuff – Rasana would like to be able to tell her readers that she once stopped a robbery single-handedly, except she’s terrified of robbers. And geckos. And two-year-olds who throw tantrums. When she’s not running scared, she’s mother to a girl and a boy who were respectively six and eleven years-old when they wrote and illustrated The Mosquito and the Teapot. She lives with her husband and children in Hyderabad, India, where a lot of her stories are set.

Posted by Amethyst Eyes at 4:40 PM

Email ThisBlogThis!Share to TwitterShare to FacebookShare to Pinterest
Labels: 28 Years A Bachelor, Rasana Atreya, Tell A Thousand Lies, The Temple Is Not My Father