I have the feeling things will be moving at a greater rate than before, for the blog, that is. I have a list of authors who would like to be interviewed and I will do my best to present them to you. Now, as  YA sci-fi author, today's genre is new to me. Although I love to read, I can honestly say I have never read a Zombie book yet. So without further delay, allow me to introduce you to the very lovely, and God I hope she's not a zombie,  Lyra McKen (aka, Emily Walker).


How Zombified Was Born
When asked to discuss how I came up with the concept and story line for my novel Zombified, I had to think back. I had to think of where I was mentally when the idea formed. I had been annoying my family and boyfriend for weeks talking about the Zombie Apocalypse. My Dad would say something about, "If the economy doesn't do something then we are in for it." That isn't exactly what he said, my father doesn't speak like that, but for the sake of this article that is what he said. I would respond with, "The Zombies will take over!"
As annoyed as my family was, I was fascinated with Zombies and why they enthralled our culture so. I begin to think how would you feel if you knew you were going to start eating people and rotting away? Cassie started to form in my mind. She was a young girl with a bright future, derailed by a disease and the end of life as she knew it. I then started thinking, what if Zombies actually could communicate and had a purpose with their constant wondering around. Slopar was born, my idea of the Zombie language. I pictured Cassie talking to someone about her life as she snacked on him and wrote the beginning.
After this I started thinking, what if you bit your crush? I had to give Cassie a gorgeous guy, figure out how to get them alone, and let her ruin it with her soon-to-be-dead tendencies. I really enjoyed writing the novel. I wanted to explore the thoughts of the partially infected, and what would happen when they met up and tried to fight the desire to feed as the infection spread. I hope people enjoy reading Zombified as much as I enjoyed writing it. Thanks for taking a trip into my mind.
xx Lyra Mcken 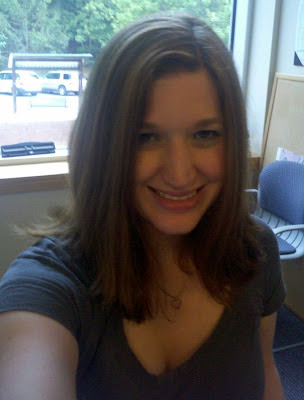 Lyra McKen (aka, Emily Walker) resides in the mountains of North Carolina. She lives on top of a mountain quite literally with her other half of nine years and her fur baby, Rebel. After a couple of jobs ghost writing for other successful authors she embarked on her own journey to write a novel.


Excerpt
“Cassie, wake up.” He stood back up over me as I sat up and rubbed my eyes.


I noticed that Ted was not with him, and he looked defeated as he sat down on the floor beside me. I crawled over to wrap my arms around him, and he looked surprised at first but then he put his arm around me and we were silent for a little while.


“We are going to have to move soon.” Brett was speaking quietly as he rubbed my arm. “He knows where we are, so when he wakes up, he may come for us. I was too late to help him.”


I did not know how long Brett had been gone, but I assumed by his tone that he had found his friend in very bad shape. It scared me that if he turned into one of them then he would know where we were. I sighed as I leaned my head on Brett’s shoulder. Something struck me as odd as I inhaled his scent. I thought that he smelled tasty.


Tasty! I was alarmed. He smelled good, but tasty was not something that should describe my crush. Something bad was happening to me, and I could keep trying to fight it, but as I glanced at my finger, I knew in the back of my mind it was only going to get worse.


He was looking at me while I was having all these thoughts, and he was too close for comfort. He smiled as he took my face in his hands and brought his lips to mine. It was everything I had hoped for in our first kiss. There were fireworks, and my whole body felt alive. I allowed him to ease me down onto the tarp and welcomed his body weight on top of me. This felt right and I wanted him all over me just like this. I had dreamed of this moment countless times and it was finally happening.


Our kisses became more urgent, and he moved one hand down to slide up my shirt. I heard a low growl come from somewhere within me. Something wasn’t right. It happened very quickly, but before I knew it, I had reared back and bitten into his chin hard. He cried out in severe pain, and tried to push me off of him, but I was latched on. I felt the skin break in my mouth, and felt my hunger as I ripped the skin away from his face. When I realized what I had done, I was horrified.


I stood back thinking of how I could remedy the situation. He sat there with blood pouring from his face and a hurt look in his eyes. All I could think of was one word: tasty. I had to get out of there. What the hell had I done? How many times had I pictured my lips near his, and I manage to get them there by biting his face off? I had to get as far away from him as possible. I ran out the entrance and into the school hall. Tears were streaming down my cheeks as I contemplated where to go. I was changing into one of those monsters.

I had literally bitten my crush’s face off! 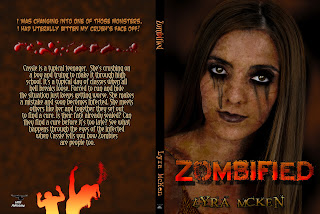 Cassie is a typical teenager.  She’s crushing on a boy and trying to make it through high school. It’s a typical day of classes when all hell breaks loose. Forced to run and hide the situation just keeps getting worse. She makes a mistake and soon becomes infected. She meets others like her and together they sent out to find a cure. Is their fate already sealed? Can they find a cure before it’s too late? See what happens through the eyes of the infected when Cassie tells you how Zombies are people too.

Posted by Amethyst Eyes at 9:02 PM