The House that Jacqs Built 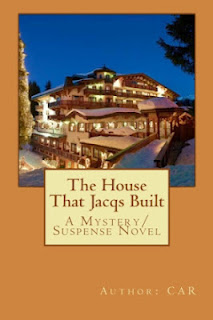 The House That Jacqs Built
A Mystery/Suspense Novel
AUTHORED BY: CAR
Carla had something to prove. There was no way she was going to be just the average.  She was the youngest child of a mother who offered her no hope. Her sister was just as hopeless as their mom.  At twenty five Carla had grown accustomed to the life. She had dealt with the you can not’s, you should not, it will never work and the your heading for failures all her life. The more she was told not to, the harder she tried. First it was just her mom, but as her sister got older she had let their mom dominate her ability to control her own thoughts which left Carla with double the dose of negativity. Carla grew up feeling like the enemy in her own home. Other than sleeping there, she had practically raised herself since the age of fifteen. That’s when it started. Carla had always had a drive for life. High school had given her that push to experience all that her mother would have never shown her. She had teachers that took interest in her and taught her well beyond the classroom.  She had become a part of every program and all the activities that she could. With her school work, her busy after school schedule and then homework; when she finally did reach home, it gave her all the opportunity she needed to avoid her mother. At home she spent most of her time in her room with the door closed. She was not only closing her body away from them but she was protecting her eyes, ears and mind from her surroundings; she refused to let them keep her confined.
Her sister Leslie had a group of girlfriends that Carla liked to refer to as the No Fly Deltas.  The No Flies were in their mid-twenties at the time. They hung around on the block, most of them not even obtaining a high school diploma, and they gossiped. Their idea of having a good time was to abuse marijuana, drink alcohol and smoke cigarettes all day long. Carla called them the No Flies because in her eyes they were never going to soar to any great heights in life. It is amazing how the world Delta represents both of what these women will never be. A popular airline that flies or a sorority group that excels but yet these Deltas would never fly anywhere.  They were Carla’s example of all she would not allow herself to be. She watched their boyfriends physically abuse them. She watched them abuse their friendship. They fought constantly cursing at each other. They borrowed bread, oil, sugar, and even toothpaste if you let them.  It saddens Carla to know that Leslie was one of the Deltas which was probably the main reason why Carla and Leslie were never close. They had nothing in common and most of the time, they didn’t even talk. Even now years later, that remains the same. No way was Carla going to adapt to that much longer in her life. She worked hard and graduated from Norman Thomas High School with honors and valedictorian of her class. She was happy to accept her full scholarship to the University of Pennsylvania. She could not wait to get out of her mother’s house; this is what she has been saving herself for. Her bright future awaits her.


Chapter 1
Carla looked over at him and smiled. He was sleeping so peacefully she didn’t want to wake him. She quietly slid out of the bed as she glanced at the alarm clock. She pulled the bedroom door shut as not to wake him. The hot shower woke her up as she wiped the sleep from her face. Seconds later she heard the bathroom door open and the sliding glass doors to the shower moved as he stepped inside and kissed Carla without any words. Carla wrapped her arms around his waist as she slid her leg between his to adjust herself firmly into his arms. She could not think of any better way to start her morning. Carla has been with Jon Jacqs for two years now. They spent many nights together between her apartment and his house. Jon wanted Carla to move in with him but Carla refused. Jon lived in a big house all alone. He had plenty of money, not because he worked hard for it but because his father did. Jon’s father passed two years ago when they met and apparently he was worth a lot. Carla was not sure exactly how much but she knew it was far more than she could ever imagine for herself. Although Carla worked very hard every day and she was only months away from becoming Carla Brandon attorney at law, Jon simply saw her as the woman in his life. He admired her hard work maybe especially because he had never worked hard for anything yet he had everything. Carla realized that meeting Jon was wonderful, he was like a gift wrapped in love. She felt as if she had beaten the odds against her. She didn’t have a man like the Deltas who abused her in any form. She had a loving patient caring man. Not only that, he was handsome, smart and sexy to say the least. He could have easily been with any woman who had as much money as him but he chose to be with her.


Carla was excited about her morning start in the office. She was researching a new case for her boss. Amy allowed Carla to freely express herself through her work. She never questioned her work methods and really appreciated all her hard work. Whenever they had a new case the two of them would sit and discuss the facts. Afterwards, Amy would call the client in for an interview. She would get their side of the story and from there take what she gathered back to Carla. Most of the time Amy didn’t even need to tell Carla what she needed because Carla was so thorough that she was already on it.
Amy was a great lawyer. She hired Carla in the beginning of the year when she herself had only been at New Beginnings for a short time. They have grown to know and respect each other’s style of work. They were a powerful team and they complimented each other very well. It was still a shock to Carla that in only two more weeks the year would be over. Ever since she started at New Beginnings that’s exactly what it has been for Carla. Carla looked up to notice the office secretary coming in to work. She was a sweet lady who had to be in her mid to late seventies. Since she was the eldest in the office, everyone referred to her as momma although they would dare not call her that to her face. She refused to be called old or the older lady. The one bad thing was that her desk sat in the middle of the office. She had not privacy or no space of her own. When Carla first entered the office for her job interview with Amy that is one of the first things that she noticed.  Carla felt that she was often taken advantage of because of it. They would literally drop files and ask her to do work that was not required of her.
In the mist of her deep thoughts Simeyon got off the elevator and waved a friendly hello to Carla. Simeyon was the cute guy with the cute name that often tried to get Carla to have dinner with him. He had been with the firm for years but to Carla he was just the office flirt. Although he was cute Carla had no interest in him. He was the firm’s runner, if that’s a good way to describe his position. He did all the footwork for Mr. Jacobs and the other lawyers. Whatever the office needs were, Simeyon was there to take care of them.  When he was in the office he handled the mail but most of the time he was on the go. Mr. Jacobs, the owner of the firm, loved him.  He called him his go to man.

The book can be purchased through amazon, barnes and nobles, bookhitch and authorsden.com. Made very simply for you to purchase ,you can get your copy through her website http://car.vpweb.com
E-books is in the works. Will be available very shortly!
And her blog http://car-carsblog.blogspot.com. Please enjoy and follow her blogs as she keeps it updated for you to know any author events she may be attending or book signings. Also, fellow authors, please use her blog as a tool for promoting your book. Contact her if your interested.
Email: car@publicist.com
Other Books By CAR

Caught Up In The Grift (Pre-sale available through her website)
The Revelation of Genesis:Unveiled (Coming Soon)
CAR is working on her fourth novel. She welcomes your reviews and comments. Thanks Again, Blessings.
Posted by Amethyst Eyes at 11:00 AM