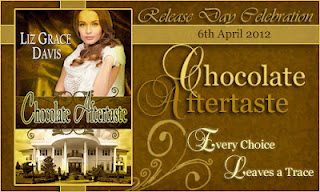 Enjoy a glimpse into the world of Liz Grace Davis and Chocolate Aftertaste. We have a wonderful bio, an interview with the author, a bit about the book, an excerpt, my review of the book as well as some links to where it can be found...so go on and enjoy a quiet moment with Chocolate Aftertaste.
Available just in time for Easter, now how perfect is that?

1. What keeps you writing?
I write because if I don’t, I won’t feel whole.
2. Can you tell us a little more about your novel, Chocolate Aftertaste?
Sure. Chocolate Aftertaste is a contemporary romance novel set in two fictional towns, in . The story follows the journey of Nora, a thirty-one year old woman who has always done her best to live up to her father’s expectations. Along the way she lost herself and abandoned her dreams just so he could be happy.  Then she reaches a breaking point, the point where she realizes that her happiness is in her own hands and if she doesn’t start living her own life, she’d lose the rest of what’s left of her. Her journey to finding herself and love leaves quite a trail of tears and broken hearts but it’s a journey she has to take.
3. Sounds very interesting and I love the title. What inspired you to write the novel?
Thank you. Actually, it was the titleJ that inspired me. Chocolate Aftertaste popped into my head first then as I interpreted what it could mean, I came up with the story. The Chocolate part of the title stands for the town (a fictional town well known for producing the best chocolate in Ireland) to which Nora escapes in order to find herself, and Aftertaste represents the consequences of the choices she makes while living in that town.
4. How long did it take you to research and write the novel?
It took me about a year and a half to write and research Chocolate Aftertaste. I think I would have finished it sooner, but there was so much else going on in my life during that time (good things). Once I was done with the manuscript I put it away for a few months because I wasn’t ready to publish it just yet.
5. Are you happy you finally published it and is there a certain message you would like readers to get out of this novel?
I’m very excited that my baby is now published. As for the message, I would like the readers to learn from Nora’s mistakes and make their own life choices. Only they really know what makes them truly happy.
6. Great message. Do you experience writer’s block? How do you deal with it?
Oh, yes. I do. To get rid of it, I just try not to focus too much on it. Usually I choose a few chapters or scenes in my novel that I’m really proud of and read them to remind me that I’m not writing complete rubbish. That often does it. If that doesn’t work, I just take a little time off to relax, to read a good book or watch a nice movie.
7. Are you a full time writer? If not, how do you make time to write?
There’s nothing I want more than to be a full time writer. But that has to wait a little. Right now I’m a student. I’m studying toward my master’s degree and until January I was working full time as well. How I make time to write, I don’t know. I often feel that there are just not enough hours in a day for everything I want or have to do. On a normal day, after getting up I tackle my university projects/assignments first. Then I spend the rest of the day writing/editing and marketing. Before I know it, the day is almost over so I prepare dinner for me and hubby, eat and relax a bit, then get back to my manuscripts. I’m a night person so I usually edit or market during the day and write at night when I’m most creative.
8. Now that Chocolate Aftertaste is published, what more books can we expect from you in the future?
In June, I’ll be bringing out another novel, women’s fiction, based on a true story. I can’t tell you too much about it right now, but keep checking my blog for updates www.novel-moments.blogspot.com.
9.      What was your best ever moment as a published author?
I have two. The first was when I held the paperback of my debut novel, Tangi’s Teardrops. I thought nothing would beat that but something did, receiving my first cheque as an author. That happened yesterday and it was such an amazing feeling to get paid for doing something I love so very much. I’m going to frame it.
10. Do you have a message for your readers?
Yes. Dear readers, thank you so much for giving my books a chance. I appreciate you more than anything. You’re the reason I’m a published author and the reason I want to get better.
I also have a message for you, Debbie. Thank you so much for allowing me to tell you a little more about myself and my book. You’re such a brilliant author and I so much enjoyed reading Amethyst Eyes. I look forward to more of your work.
Thank you, Liz, that means a lot to me. It was nice having you here. I too look forward to your next books. 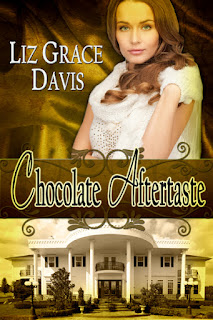 At her pre-wedding dinner, Nora Darkin, the daughter of a wealthy entrepreneur, discovers her fiancé is not the man she thought he was. As her father hoists his glass to toast them, she makes an announcement: there will be no wedding to her father's right-hand man.
Due to the fresh rift driven between her and her father, Nora escapes to the quaint town of . Determined to live her life her own way, she makes new friends and pursues her lifelong desire of becoming a chef. Ethan Danes, a neighbour with his own broken heart, helps soothe hers.
Just as Nora discovers what it means to be happy, and she begins to fall in love with Ethan, a woman from his past re-enters his life…
﻿


Nora turned her attention back to the reality in front of her. She hated arguments; sometimes she wished she could hide somewhere, just wait them out. Unfortunately, life was not like that.
She lifted her eyes to meet Liam’s. The ice in his eyes had not melted. She dropped her gaze.
Instead of flirting with her appetite, the large marinated tiger prawns made her stomach queasy, and the oriental noodles looked like neglected yarn left out in the rain. From the way he dissected his steak, Liam’s appetite was just fine. She gritted her teeth as his knife scraped the porcelain plate.
Unable to bear the silence between them, she leaned forward and whispered, “I hate it when you ignore me.”
“What do you want me to say?” He chewed the last of his food and waved for the waiter. “We’re done.”
The waiter nodded and scuttled over to remove their plates.
When the waiter was out of earshot, Nora hissed through clenched teeth, “I wasn’t done.”
Liam took a swig of water, probably wishing it was something stronger. “You didn’t look like you were hungry.”
“Stop treating me like a child,” she snapped.
“Stop acting like one.”
Nora’s cheeks heated. She contained her anger with difficulty. “That’s really insensitive.”
“What do you want from me, Nora?” A vein pulsed in his neck. “What exactly do you want me to say?”
“Say you want me to be happy.” Her eyes brimmed. “Don’t ask me to get rid of my best friend.”
He loosened his tie—and then slammed his fist on the table, knocking over Nora’s glass of water. The silver stream raced straight for her lap.
The waiter appeared as if from nowhere to replace the white tablecloth with a new one. Nora forced a smile and whispered an apology. The waiter nodded, and a minute later he left.
Ignoring the curious looks they got from the other diners, she dabbed at the moisture on her black jeans. “You can’t always explode every time I refuse to do what you want.”
Liam ignored her. “Ask to pay. I want to leave.”
Nora flinched, but abided. Paying wasn’t so bad—so long as it was fair. On their first and second date, he paid. On their third and a few more after that, they went Dutch. After one year, he asked her to pay for an occasional meal until it became an unspoken arrangement between them. The only thing Liam had paid for himself in three years was her engagement ring.

Review
I loved how real everything in this book felt. The characters came to life and easily pulled me into their story.  The writing of this talented author paints intense emotions in a way that you can’t help but experience it all along with Nora as she learns to stand on her own and eventually spread her wings. There were times where I was so sure of the decisions Nora was to take, only to be surprised by the creative path the author chose for her instead.
Liz describes the settings so well that you can see, feel and smell everything around Nora. By the end of the novel you will have experienced every emotion possible and watched Nora grow through her trials, all while visiting the wonderful places created by the author.
﻿