After the brutal cold, Mother Nature dumped close to two feet of snow and topped it off with freezing rain. The up-side is that we're supposed to have an awesome spring. It can start anytime now...I'm ready. But sadly, we're still mid February, and winter has been known to drag its feet. The good thing about this time of year is that almost everyone should have lots of chocolate on hand!
And what better way to enjoy some of that chocolate than to curl up with a book that has Cupid in it's title? Read on, I'll go get my stash, there's plenty to share. 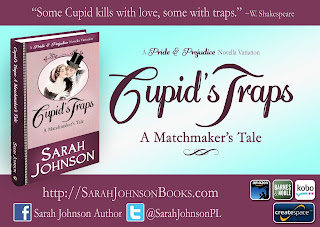 My journey to picking up the pen was completely out of the blue. I wrote a little in school, but was otherwise never inspired to do so again until one day a forum I was often on announced a new writer’s contest. I figured, sure, I can try it. I was never short on ideas, so after forming something in my head, I wrote it. I won some prizes for that contest! While that was exciting, what was more exciting was that the story I wrote did not stop in my mind with the original scene. So, I continued to write it, and it turned into a long story of over 300,000 words, later to be turned into my first published novel series, Leaving Bennet Behind. I love how life pushes us into these situations that we might have totally ignored had we not dared take a chance. Good for you.

I do write full time, but am hardly ever alone. Some weeks I get more time than others, as my family responsibilities take over. I do not work outside of the home, so I take care of meal planning, cooking, and cleaning, as well as homeschooling our six children. My writing takes place between the spills and pencil wars that come with such a life. Haha, I can relate!

What do you think makes a good romance story?

My husband, my mom, and all my friends will immediately tell you that they are shocked that I write romance stories, as I am not a romantic person. I guess my ultimate definition of a romance would be: love and good wins while hate and evil are vanquished. Now that just fuels my belief that as an author, our job is to express the story that is already there, in its entirety, waiting to see the light.

I usually start a story with a small seed of an idea, and then write about 5,000 words or so before I need to stop and figure out where it is going. I have a general idea by then usually, but the journey to getting there always works best when I leave it to play out while I write. There are times I look at sections, though, and think that the resolution is happening too quickly, so I will rearrange things, but generally I try to write in order or how it ends up being. It helps me build the characters properly when I write in order. That I understand. Personally, I can’t imagine writing scenes out of order. It would be like hindering the flow and not letting the story come to life.

Well, since I write historical fiction, I have been collecting tid-bits of information for many years. There are some things I just know, and a lot of things I keep in a notebook by my desk or bookmarked in my browser. I have a small list of websites I check first when I need to know something new.

I have tried all sorts of ways, and I do whatever I feel might work at the time, but I have found, through the years, that the best marketing for a book is to get another one written.

Don’t quit! Keep working towards that moment when you finally write “the end”, and then have a little party, but don’t stop there. Keep learning. Keep growing. Keep writing.

Cupid’s Traps: A Matchmaker’s Tale is a novella that is different than all of my others. I wanted to explore writing more comedic scenes, so it has a lot of slips, trips, and falls, as well as a great happily ever after. The inspiration for it was Shakespeare’s line in Much Ado About Nothing (Act 3, Scene 1) that says: Some Cupid kills with arrows, some with traps. It caught my attention, and I had fun coming up with ways Cupid, and his cohorts, would help bring about happiness for a couple.

Where does the inspiration for your main character and story come from?

I write stories based on Jane Austen’s characters from the novel Pride & Prejudice. It has always been one of my favorite books, and it is fun getting to explore how I can change just one thing here or another thing there and end up with a completely different story for Elizabeth and Darcy. It is almost like a perpetual choose your own adventure book for me. Now that sounds like fun.

What is the time span in your novel, weeks, months, years?

Cupid’s Traps: A Matchmaker’s Tale, takes place over the course of just a few weeks’ time, starting with the Easter holiday at Rosings Park.

How much research went into your story?

There were some fun things I had to research – such as knot tying and boats in the Regency period. Mostly it was just a fun tale though, drawing on information I already knew. Now you never can tell when knot tying will come in handy!

I am currently finishing the fourth and last book in my novel series, Leaving Bennet Behind. My goal was to have it out this month, but then I got sick, so maybe Easter is a more realistic time frame for it being ready. The series is, again, based off of Pride & Prejudice, and explores the changes that could take place with a major accident that alters the family dynamic just a few years before it begins. That altered dynamic, of course, leads them down a different path, and this series follows all five Bennet sisters as they each find love and leave the name of Bennet forever behind them. Now that one went right over my head. I thought some poor guy was being left behind, lol. 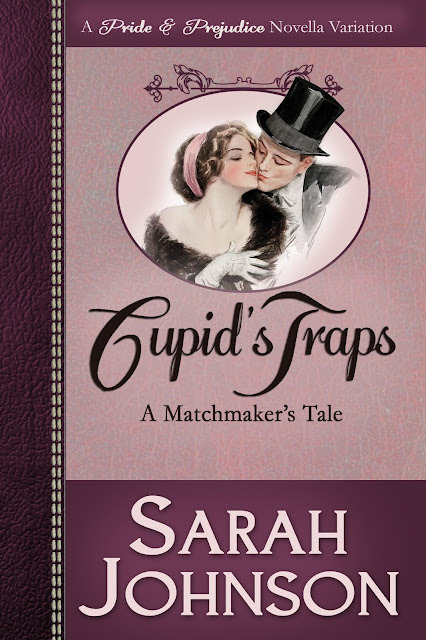 Synopsis:
William Shakespeare said it best when he penned, ‘Some Cupid kills with arrows, some with traps’. Georgiana Darcy, in her first matchmaking adventure, might need to call in a few favors from her family, or even Cupid himself, in order to pull off the perfect match for her brother, Fitzwilliam Darcy. He is truly smitten, but the lady, Miss Elizabeth Bennet, is not impressed with his character. Within the throes of Cupid’s traps, will she finally see that her heart is touched by this handsome gentleman before these traps force them into a union?

Sarah Johnson is a professional juggler in the circus of life! Married to her own Mr Darcy for seventeen years, they traveled the world thanks to the US Army. Now back in the 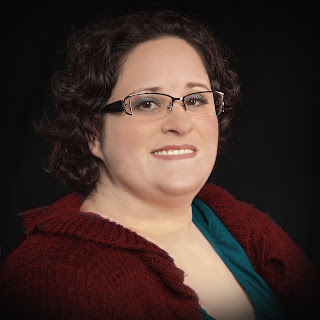 civilian life and settled in Texas, where she grew up, they focus on homeschooling their six children and participating in church and community activities. She can often be found writing a manuscript between spills, science labs, and pencil wars, or late into the night when the house is finally still enough for her imagination to run wild! When she has a few spare moments, she enjoys just about anything crafty - scrapbooking, painting, sewing, quilting, crocheting - basically anything except knitting, a craft she swears few left-handers truly ever pick up well.

A devotee of all things Jane Austen, she enjoys exploring the story lines Jane never lived long enough to give the world. She is often found discussing with her online friends the intricacies of the novels we do have from our dearest author. It is these discussions that often lead to the plot bunnies that have now become many stories over the last few years, and hopefully further into the future as well.

Reviews:
Amazon Reviewer: J Bennet
A hilarious sweet romance. ... Perils of Pauline combined with Wuthering Heights! This is a laugh-out-loud romp that will make you love the P&P [Pride & Prejudice] characters more than ever. Don't miss this engaging short story. It deserves every one of its five stars.

Amazon Reviewer: RCM Silvia
This is a delightfully amusing romp along the courtship trail-- akin to A Comedy of Errors! The novella is charmingly narrated by a determined Georgiana via inter-chapters wherein she explains her good intentions leading the chapter itself to reveal the lengths and depths of ensuing confusion. A very fun read!

Amazon Reviewer: maryann
What a great novel. It is light, airy, and easy reading as well as it keeps you interested and you really don't want to put it down. This one is a matchmaking plot primarily by Georgianna with the help of the Colonel and cousin Anne at times. It is comical, entertaining and truly a love match that cupid's arrow hit Darcy's heart from the beginning but Cupid's trap caught Lizzy. You will have to read this novel to really see why I gave it 5 stars.
Amazon Reviewer: T. Garcia Ruy Sanchez
You really have to read this story if you want to spend a very agreeable time with a really novel approach to a twist of a favorite book. It's really worth it!!

Amazon Reviewer: Debra
Delightful tale! I thoroughly enjoyed this humorous version of my favorite couple. Georgina is cupid's accomplice in this sweet version of how Lizzie comes to love Mr, Darcy.

Book Trailer
Posted by Amethyst Eyes at 12:00 AM