Intreview with Caz from The Gypsy Pearl, by Lia London

The Gypsy Pearl is the latest in Lia London's creations. How fortunate we are that she was able to provide us with this exclusive interview with  Caz Artemus, none other than the future....well, wait. I won't give it all away just yet. You'll just have to read on! 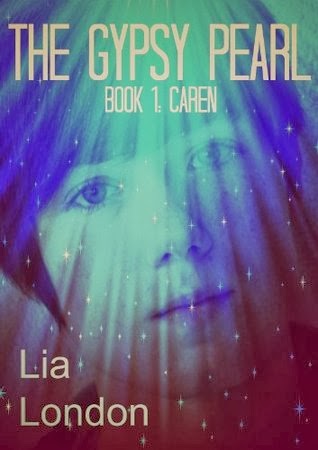 Q: Hello, everyone.  I am here to introduce Caz Artemus, the future queen of the Granbo System.  Caz, welcome.  Can you tell us about your childhood?

Caz: My childhood was exactly the same as everyone else’s who grew up on an Interplanetary City-Station.  Mine was the Arxon, the biggest ICS in the Granbo System, but that didn’t make it any more fun.  We still had all the same strict rules that try to squash creativity and curiosity.  You can’t have a real life when you live in a big metal box flying through space.

Q: Don’t you live there with your family?
Caz: My mom left us to go down to the Surface when I was four.  My dad is the Arxon’s chief physician, so he’s always busy.  My big sister, Felly, is the ICS ideal: clean, obedient, and totally boring.  But, in fairness, she is loyal and kind, too.

Q: Why and how did you leave the Arxon?
Caz: That was actually a lucky accident.  I got in a little fight with Jeroby and did more damage than I meant to.  Mr. Lew, the Station Master, gave me the option of going into Solitary again, or serving a rotation in a reformatory on the planet Caren.  I jumped at the chance to come to the Surface.   The Ferry got me down here, and that’s where I met the gypsies, during the ride.

Q: What do you think of the Surface?
Caz: It’s amazing.  Overwhelming at times, but amazing.  I’m still getting used to the air because it changes temps and velocity, but I love the way it smells.  It’s like nothing in space.  It is really dirty—I hate mud—but the colors are so vibrant, and everything is so big.  I love that nothing stays the same.  Even the trees move, and the sky changes shades throughout the day.

Q: What about the gravity?  Most ICS dwellers struggle with being able to stand up or walk around for the first few weeks.
Caz: Well, I can definitely feel a greater pull than the artificial gravity on the Arxon, but it doesn’t seem to affect me like it does the other inmates.

Q: And why is that?
Caz: I’m guessing it’s because I have a gypsy pearl is inside of me, and it rejuvenates my cells so I’m stronger and heal faster.

Q: How did you get the gypsy pearl?
Caz: I’d rather not talk about it.

Q: Did you steal it?
Caz: No, I did not steal it.  Why does everyone assume the worst from me?  But, I’ll admit I was somewhere I wasn’t supposed to be, and a fanep gave it to me.

Q: What’s a fanep?
Caz: They’re those little humanoid creatures with retractable claws and big teeth that travel with gypsies.

Q: Are they dangerous?
Caz: This one can be, but he also has become my friend.

Q: Speaking of friends, did you leave any on the Arxon that you miss?
Caz: Not really.  Felly was the only one who stuck by me.  But I made a few friends at the Reformatory.  Alf, in particular.

Q: What’s Alf like?
Caz: Dangerous and gorgeous.  But I’m not afraid of him.  Even if he they started the cheek tattoo.

Q: Cheek tattoo?
Caz: Killers are marked with tattoos on their cheeks.  The guy Alf attacked pulled through at the last minute, but they had already started the tattoo.  Maddy has one, too, but he was acquitted after serving four years in the Craggy facility.

Q: Who’s Maddy?
Caz: He’s another friend.  A gypsy man.  It was his pearl that the fanep gave me.  And by “gave”, I mean he sliced open my arm and shoved it into the wound.

Q: And why would he do such a thing?
Caz: The pearl must be given or it won’t work.

Q: What does that mean?
Caz: The faneps have a belief that a cycled pearl—a pearl that has been to all three planets in the Granbo System—brings a body great power.  Power enough to unite the entire system under one reign.

Q: Is that what you’re trying to do, rule the system?
Caz: Yes, though I’m still not too sure about the whole queen thing.  It’s ironic that I, who hate rules, would ever be a ruler of any kind.  Right now I just know I have to go to the three worlds, receive three gifts, and obtain three powers.  When I get that far, we’ll talk about my plans for interplanetary domination.  I think I’d rather just go exploring with Alf.


Caz: I have no idea.  No day has gone the way I thought it would since the fanep gave me the gypsy pearl.  But I think it’s safe to say it’ll be an adventure, and I’ll be glad I came in the end.

If you want to know more about Lia and the amazing group/blog/collection of authors called "Clean Indie Reads" she has created, then stop by here: http://amethysteyesauthor.blogspot.ca/2013/07/cir-place-to-be.html

She is an amazing person, and you will just love what she has done!
Posted by Amethyst Eyes at 10:18 PM