just wanted to let you know I am still here, and almost 36 weeks along in this pregnancy :o). Today, I have the privilege to introduce you to Robert Michaels and his Middle Grade book, Gazpacho, which is set to be released on Aug 25, 2013, thanks to GMTA Press. GMTA Publishing LLC

So, without any further delay...because you know in my condition, time is of the essence, allow me to share with you what I can. 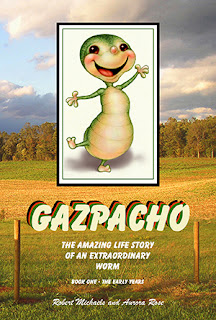 Gazpacho , a "Rarus Nimus Foetidus Loquaciatis Rauca Mollis" is a newly discovered species of worm that has the ability to communicate with most every living creature. But what his species is most know for, throughout the bug and animal world, is their highly toxic glands that produce a considerable amount of stink whenever they are stressed or in danger.

This toxic "handicap" or stinky "gift", depending on how it comes to be used, sets the stage for Gazpacho's early years just as it serves to enrich his life experiences and fuel his grand adventures. From his birth in the northern forest glen to his plan of becoming the next great singing star and idol sensation, Gazpacho learns of love as he overcomes the many obstacles and prejudices against him to finally summon up the courage to leave home and live out his dream!

This is the first book in a series of four that tell Gazpacho's amazing life story!

Oh what a glorious light it was, so brilliant, bold and white.
The light was so magnificent and powerful that I struggled in vain with my yet unopened eyes to gaze directly upon it. At first, with only but a glance and then with only a glimpse, I attempted to shield my newborn sight with the aid of the tiny hands and fingers that appeared there before me all aglow and bathed by the radiant light.
I quickly learned that each precious digit was mine to command. And, once I did, every one of them was sent out on the same mission of exploration, toward the light, filled with the hope and desire to touch it. Floating mere inches above me from where I lay, the light hovered ablaze, in all of its divine splendor, just out of reach. I soon came to understand that the light was never meant for me to touch in that way, but it was there for me to feel in a different way, instead. From somewhere deep inside myself I felt the incredible presence that was within it and it reached out to me with a message of love. As my eyes adjusted and grew more accustomed to the light, I marveled to behold a multitude of colorful rays on display. They danced, flickered and sparkled out from its center in every direction possible. All to a dazzling effect that filled me with joy. 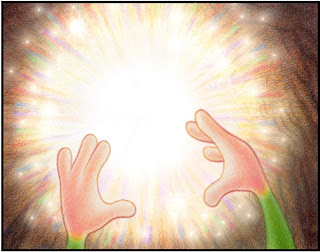 Not a sound did it make, but even in the first few moments of my life, I knew that, somehow, the light had come to greet me and to help see me into the world. And I loved the light, almost as much as I felt the presence within it love me. Soon after I had made the connection with it, however, the light pulled away, faded and left. I didn’t like to see it go, but I was so very glad for the time that it had come to be with me. Even more than that, I was ever so grateful for the experience it left me with, to have known, felt, and witnessed something that was that good.
As those moments faded away, all of my physical senses took on a greater awareness. For the first time I heard soothing and comforting voices around me. At first the voices were faint, but before long, I could hear the sound coming from somewhere near me. Although I couldn’t understand exactly what they were talking about, I could feel that they were saying all kinds of nice and wonderful things just for me to hear. Love is also what I felt from them. And even though it was somehow different from the love that I felt from the light, the feelings were unmistakable and I loved them very much too!
So… this is what it’s like to be alive. Well hey, this certainly feels great! I really like it here! 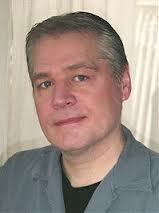 AUTHOR BIO
Robert Michaels (Robert A. Nicpon) was born in Chicago, Illinois and he lived there until the age of 7. It was during Robert’s high school years that he discovered his passion for art, and it was in his last year of high school that he decided that he wanted to produce art for a living. In 2006 Robert learned that what really matters the most when producing a work of art is telling “The Story” and telling it well. When this was discerned, Robert received the inspiration to write the story of Gazpacho. With the help of his beloved coauthor Aurora Rose, Gazpacho’s story has grown into a four book series that chronicles Gazpacho’s amazing life.

Thanks for joining us! Hope to hear from you all soon, and I'll let you know when the baby arrives :o)
Posted by Amethyst Eyes at 6:51 AM