It would seem winter has settled here already. In my case, a couple of logs on the fire, a steaming cup of organic chai latte and a good book...perfect.  Read on, you might feel the urge to lose yourself in the world Diane has created. 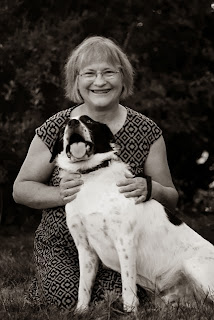 I never expected to be a writer.  In fact, as I left high school I didn’t expect to be much of anything.  I had learning disabilities and failed out of pretty well everything I took in school.  My writing skills were so bad that I was embarrassed to write a letter.  The wounded child within needed a lot of healing for me to believe that I had anything to offer the world. But love heals, and unconditional love is tremendously healing.  The years passed and I graduated with a Masters of Divinity and became a pastor in a church.  A few years in I overdosed on people and needed a break.  The only thing I had the remotest interest in taking at a nearby retreat centre was a course on writing fiction taught by Joanne Gerber, author of “In the Misleading Absence of Light.”  I thought it would be an easy undemanding week; a puff ball course.  It wasn’t.  I had no aspirations to be a writer up to that point.  To this day I believe Joanne was just being kind when she said I could do it if I choose to.  On the way home I had the idea for Ben the Dragonborn and started writing.

I am still a pastor and for the moment that is my full time work.  I have a lovely congregation that is very supportive and appreciative; however, in the not too distant future I hope to give writing a more central place in my life. 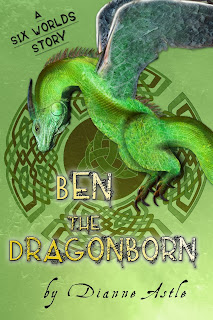 Ben the Dragonborn is a YA fantasy.  It is your basic unlikely hero story.  Everyone, including Ben
thinks a mistake has been made when he is chosen and called to go forth to help solve a problem on another world. The first person he meets on this world is a mermaid with attitude named Charla, who is not overly fond of humans.

Would you take us on a brief tour of your novel and the world you’ve created?

Ben the Dragonborn opens on a mysterious island off Canada’s west coast.  On this island there is a little known school where students from around the world are trained and prepared to go through portals to others worlds.  There are six worlds bound together under the care of one known as the Guardian.  Each world has a school.  The principal of the school is also the Watcher.  He or she has a mystical connection with the Guardian, other Watchers and with their own world.  When their world is in pain the Watcher knows it.  Ben is sent to see Miss Templeton, the Watcher of Earth to talk about his fear of water, and finds himself unexpectedly sent to a world full of water. Chosen and sent by the one known as the Guardian.

I am really not sure.  I’m astounded that I am the writer of this book that makes my heart sing.  It seems incredible that I had the imagination and the ability to do this.  All I can say is that Ben is an unlikely hero, and I have an affinity for unlikely heroes, perhaps because I am one.  I have also always been drawn to dragons.  So it makes sense that dragons, both hero and villain have a central role in my story.

Any story I wrote would be grounded in the values that undergird my faith; however, Ben the Dragonborn could not be described as a Christian book.  It is a value based book with a spiritual thread.  I did not start out to write a book with a message in mind.  Any message people find in it developed as the characters came to life.  The message that I hope people read into it, is the message that we are all more than we think we are.  I would love people to feel inspired to do what they can to make the world a better place for us all.  I would like people to see themselves like Ben, as chosen and called to make a difference in the world.  However, Ben the Dragonborn was first and foremost intended to be a good story, and if that is all it is then I am content.   Of course it will be the readers that will determine whether it is a good story.  The jury is out until people read and review it.

The time span in this book is a matter of weeks.  I did a limited amount of research.

I went to the swimming pool and asked about life saving techniques and searched on line for other information.  A catalogue would be too organized for me.  I can see the value, but organizational skills are not my strong point.  Perhaps I will try to have a card catalogue system next time because there were times when I forgot a minor character’s name.

I have never tried to write a novel before.  I once had a puppet skit published, and a sermon I wrote after the attack on the trade towers was published, and the occasional article for the local newspaper was published.  And of course I write a message for most every Sunday.  There are a lot of creative opportunities in ministry.  Over the years I have written several short skits and dramatic monologues and  always had people willing to act in them.  I have really been blessed.

I know very little about present day publishing as this is my first book.  All I know is that it is hard to find time to work on the sequel to Ben the Dragonborn with my job, volunteer activities, and remodeling my house.  I also need to make sure I walk the dog every day so his evil twin does not show up.  Now that Ben the Dragonborn is published I am finding other distractions to keep me from writing.  I spend more time online, and I am meeting authors who have written some wonderful books.  I hope to carve out some time for the sequel as I have an idea for a third book.

I read Mark Coker’s book on Marketing and implemented at least two of his suggestions: I made a signature for my email and joined Twitter.  I also made up bookmarks.  Twitter was an excellent idea, which has opened up other possibilities.  My next step is to do a trailer for youtube and put in place some advertising.  I also plan to write something to give to the local newspaper and contact a training centre that has an independent book store.  I also thought I would see if the local used book store would take print copies of my book.

Rewrite, rewrite, rewrite.  Edit, edit, edit.  If you can afford it hire an editor.  I wish I would have.  When you think it is ready, rewrite and edit some more. Make sure it is the very best it can be before you release it.  After editing Ben the Dragonborn a zillion times I still found mistakes short days before it was to be published.  In fact the person who is doing the Youtube trailer for me found a half dozen mistakes.

I am working on a sequel to Ben the Dragonborn.  Ben will need to go to his mother’s home world to learn how to transform safely.  A strange boy named Willie, with a knack for just knowing things without being told will go with Ben.  As will Allison, a girl who makes Ben’s heart go pitter-patter.

Ben the Dragonborn is also available on able as an ibook and will be available from Amazon as a print book.
Posted by Amethyst Eyes at 1:56 PM

Email ThisBlogThis!Share to TwitterShare to FacebookShare to Pinterest
Labels: Ben and the Dragonborn, CIR, Diane Astle